Posted by ilaria.matteucci on Wednesday, 26 September 2018 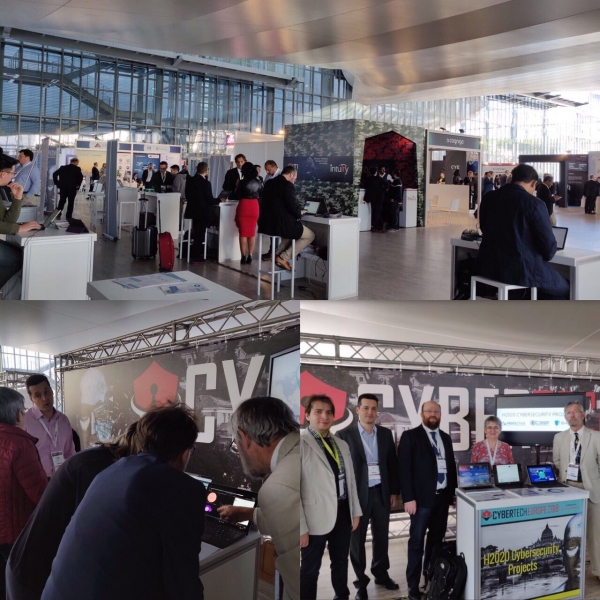 The C3ISP project took part in CyberTech Europe which was held in Rome this year on 26th and 27th of September. CyberTech Europe is one of the world major Conference and exhibition events focusing on Cyber Technogies and Security and attracting thousands of attendees not just from Europe but internationally. This was a perfect venue for the C3ISP project to exhibit its capabilities and to demonstrate the C3ISP Pilots to a diverse audience that included Research institutions and Government Agencies, as well as private companies from different market sectors including Defence. The C3ISP Pilots were demonstrated in the Exhibition hall on a stand shared with two other Horizon 2020 projects, namely the Protective and Shield projects. Visitors to the stand were given the opportunity to see videos that described the C3ISP capability applied in the context of the various Pilots including the CERT Pilot, the Enterprise Pilot, the ISP Pilot and a video introducing the SME Portal. They were also shown videos that provided a clear visualization of the data analytic capabilities that could be provided on the C3ISP platform. Many of the visitors to the stand took the opportunity to have interactive one to one discussions with the C3ISP / Digital Catapult team as we talked them through the various Pilot scenarios and associated videos. There was a good level of understanding shown in these discussions concerning the benefits of sharing Cyber Threat Information and of the value that the C3ISP capabilities bring to managing the associated commercial and regulatory concerns. In addition, a panel in the main cybertech conference program was held in collaborative information sharing and moderated by Fabio Martinelli, C3ISP project coordinator. The two other projects Shield and Protective were invited to present their respective approaches and discuss together the complex problem of cyber treat information sharing and management. The cybertech conference was attended by more than 4 thousands people and had more than 100 speakers. A lot of interest was shown in the C3ISP commercial model, the open source aspects and the timeline for delivery. All in all there was a significant amount of audience interaction and participation in our C3ISP Pilot questionnaire which enabled us to achieve our goal of gathering a useful feedback on the C3ISP Pilots from our target audience. As a final point it is worth highlighting that there was a good collaborative approach at the cybertech event between C3ISP team and the other two EU Horizon 20 20 project teams, Protective and Shield highlighting the complimentary nature of this suite of projects.